GBRC Update - As of Guernsey being 100 days Covid-19 Free

2020 has been a year designed to test us on every level from personal to professional. It demonstrates the maxim:

“The best laid plans of mice and men…”

We had well laid plans for events, surveying and citizen science projects … instead we spent 6 months on pause. But every cloud has a silver lining … this time with family has helped so many people reconnect with nature and appreciate our island’s wild spaces.
So now that we’re over 100 days Covid-19 free (no active cases) what HAVE we done?

Well, Julie used her mandated exercise to walk the cliffs undertaking our annual black-backed meadow ant survey. It’s not been a great year for the ants, we’ve gained 5 nests … but lost 12 more, although after the wet winter we were expecting some loses.

Moving on from land and air we head out to sea … our dolphin surveying took a hit in terms of organised events, but ad-hoc public sightings are very much UP across the board on previous years. Nicky has been combing through social media and collating reported sightings. Bottlenose dolphins, porpoises who were rather elusive last year, common dolphins, Risso’s dolphins AND Minke whales all appear to have enjoyed our quieter seas.

Lihou BioBlitz What an incredible day we had at Lihou...

The Barn Owl survey visited, with permission, several sites where nesting barn owls were reported. Owlets were ringed, weighed and checked. You might think that an owlet (a baby owl) would object strenuously to be owl-handled, an indignant ball of fluff and furry. Instead they are quite content to lie back and let you weigh them … on “borrowed” kitchen scales … just blinking their big eyes at you. All ringing was done by trained bird ringers. Ringers have to complete a 3 year apprenticeship and then need to complete an additional qualification to before you’re allowed to ring owls, so we are very grateful to Chris Mourant and Vic Froome for ringing our owlets.
Barn Owl Project Page

Seals played hide and seek with divers in the kelp while sunfish have flapped their fins lazily in record numbers as they trundled from place to place. With sunfish about that can only means one thing … Jellyfish! And we’ve had lots of reports of them too. We have 6 jellyfish species locally and a good rule of thumb, is look, but don’t touch as even the dead ones can pack a nasty sting. Have a look at the form below to see what jellyfish you might have spotted this summer.

You can download your own copy of the Jelly Detective form at: https://www.wildlifetrusts.org/how-identify/identify-uk-jellyfish

My long overdue return to Guernsey coincided with National Whale and Dolphin watch which ran from 25th July – 2 August 2020. First day out of quarantine and it was straight out to sea with Richard Seager of Out the Blue. We set sail in calm seas, but round Sark a sudden squall sprang up and we abandoned the survey for a wild rollercoaster of a ride. Which is why you should always go to sea with a professional. He steered us safely out of the storm and back towards Herm, so we emerged unscathed, if somewhat damp. The dolphins may have hidden from us but other sea life was happy to put on a show, with gulls, terns and gannets wheeling above to shags spreading their winds on rocky outcrops and peregrines danced overhead. 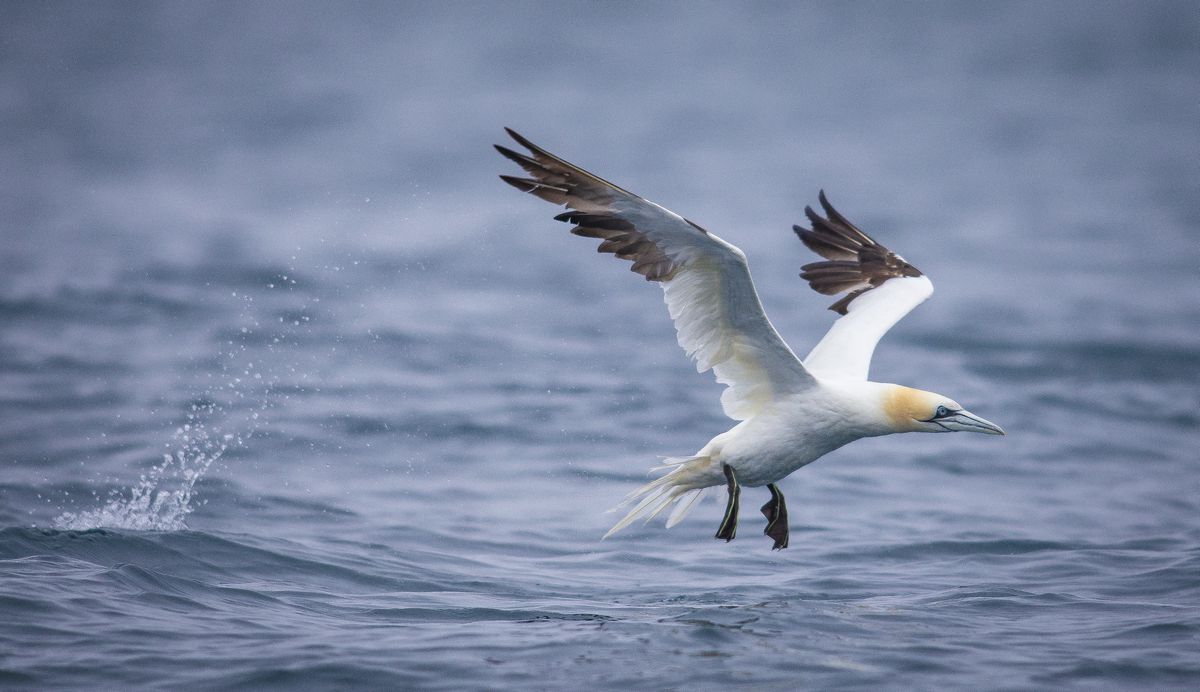 Gannets in particular are unofficial helpers when there is a school or shoal of fish. They plunge from the sky like a missile, streamlining their body to pierce the water at speeds of up to 100 km per hour before bobbing up in a remarkable imitation of a rubber duck. Where there are fish there are predators … so follow the gannets and, more often than not, you’ll find dolphins or tuna!

After the excitement at sea you’d think land surveying would feel somewhat tame?

The great thing about land surveying is that it’s more accessible and people can pop in and out for a short period rather than a full watch and we can set up scopes so you don’t end up holding heavy binoculars for hours on end. The proximity to ice cream is a bonus.

Jerbourg Point is a great spot to survey from as there are facilities on site. The option to run down the cliff path to sea level is there for the adventurous in hopes of spotting the resident grey seal. For those of us who don’t fancy the steep climb back up, the lookout point near 300 degrees field of view and a front row seat to watch our birds put on a display while bees buzz and butterflies flit around. 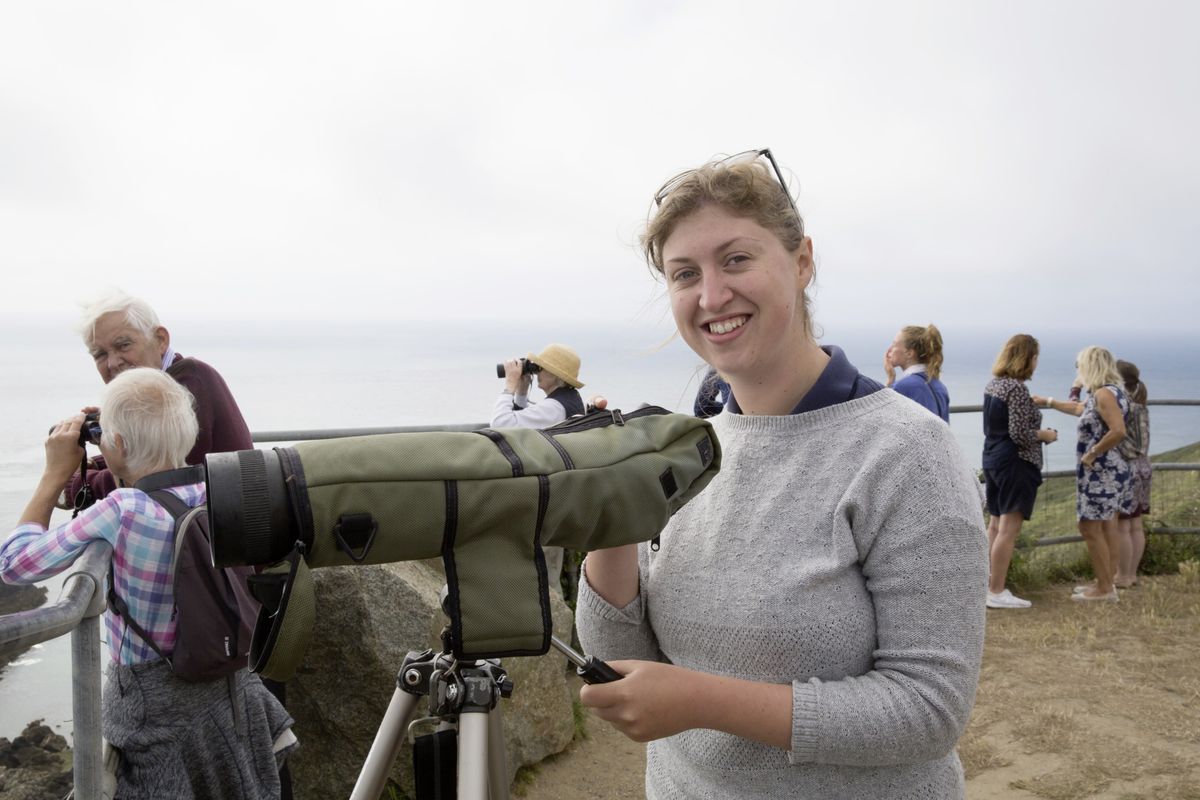 The strong current running along our south coast then heading east towards/past Herm and Jethou is a marine super highway and dolphins regularly travel along it. It can take a whole to get your eye in which the many currents, deep and shallow patches of water and reefs, but once you see those fins … it’s all worth it.

No dolphins appeared on the 1st of August, but a small pod of porpoises made a brief appearance less than 10 minutes before we finished. With their small fins they’re often harder to spot and it made it all worth the effort!

Our final watch took place at the other end of the cliffs, down at Pleinmont where the calm start to the day rapidly deteriorated due to increasing wind. The roughening water rapidly turned choppy reducing our chance of spotting anything, but had the flip benefit of creating strong updrafts so we were treated to the kestrels lazing on the thermals. They flew so close we could see the yellow ring around their eyes and mottled chest feathers.

Why Citizen Science is so important…

Something that is rarely appreciated is that survey work is 99% slog and 1% amazing.

Dolphins can travel 100 km in a day, ranging their territory and looking for food. Highly intelligent, we can try and predict their patterns but with little success. This is why citizen science is so important.

The first survey for NWDW is a great example of this … We were out at sea over 2 hours.

Sprint down to the pier any tuna are long gone.
Ah well…. home for a cuppa.
*Beep Beep*

Text: Risso’s dolphins – female and calf off the South Coast

It's enough to make you paranoid the dolphins have their own messaging group ... on Clickr maybe?

Are they out surveying?

Are they gone yet?