This is not Guernsey's first death's-head hawk moth... in fact:

''Common in Guernsey and Sark. The larvae were abundant in the potato-fields in 1868, but I have not often met with them since.''

Luff, W A
The Nocturnal Macro-Lepidoptera of Guernsey, Alderney, Sark, and Herm

So although this isn’t the first sighting or breeding, it IS the first confirmed pupation in 152 years!

These beautiful creatures get a pretty bad rep because people think the face is a skull. In fact some scientists now think it resembles a worker bee’s face and is part of the moth’s camouflage when it’s raiding honey bee hives.
What’s even cooler is that it squeaks in a way that sounds like the noises a Queen bee makes and even excretes an odour that contains the same compounds as those found in honeybees.
In a nutshell the moth disguises itself like a bee, smells like a bee, sounds like their queen to enter their home for a time while stuffing itself on their honey. Death’s Head Hawk Moth? Maybe it’s due a name change to Goldilocks!

0 mph
Death-head hawk moth is the fastest moth in the world!
Guernsey AdminSeptember 16, 2021

Lihou BioBlitz What an incredible day we had at Lihou...

“Rich Austin was undertaking some regular moth trapping in  St. Saviour’s when amongst the catch was a stunning Death’s Head Hawkmoth… Europe’s largest… and surely one of the most impressive… moths! Apparently this was the 2nd one trapped in Guernsey this year.”

Head over to Guernsey Gulls Blogspot to read more and see all the photos: 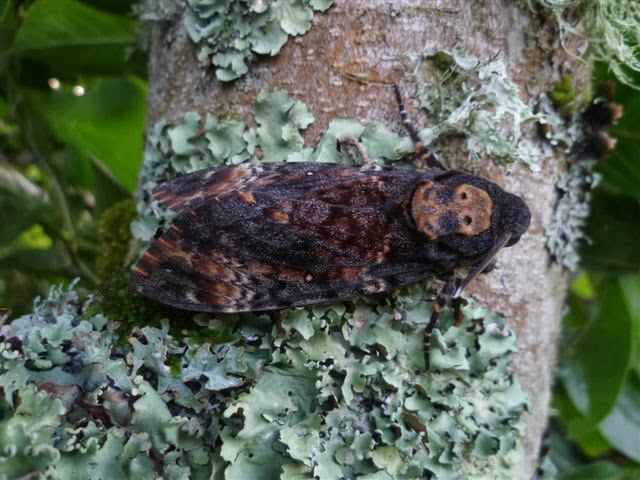 We had an unexpected visitor at at Hirzel Court which was reported to the Records Centre. The stunning moth, affectionately named, Mothy McMothface by photographer Sue Vaudin, was in fact a Death’s Head Hawk Moth, Acherontia atropos.

Retweet for #FascinatingInvertebratesWeekend When I saw disco neon Death's Head Hawkmoth Caterpillar I couldn't resist sharing the adult that visited #Guernsey in 2019. Screenshot from Instagram as it includes info about this amazing moth's habits. #mothsmatter https://t.co/urpxrFjxyI pic.twitter.com/2bkeEwZRAj